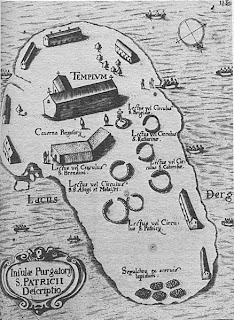 With bare feet, they shuffle around the island muttering prayers; pain and suffering writ on their faces and a rainstorm breaking over them.

An ancient pilgrimage set in what medieval Christians called “the ends of the world” is undergoing a revival in Ireland as economic woes prompt a spiritual reawakening.

St Patrick’s Purgatory, on Station Island, a rocky islet in the midst of Lough Derg, was once Christendom’s premier pilgrimage. Its renown was based on the belief that it was a gateway to the next world and a place where penance could be matched to any sin.

Now that the material world of the Celtic “tiger” economy lies in ruins, the annual pilgrimage season is providing evidence that Ireland is returning to its roots as an island of saints and scholars. More >>

Within the last two months Ireland has seen the publishing of the Ryan Report, an investigation into widespread child abuse in religious institutions, and it has shaken the country fiercely. Couple those problems with the colonial hangover and the Catholic Church in Ireland is facing rocky times ahead.