Have not money, possessions, power and even knowledge, diverted man from his true destiny? 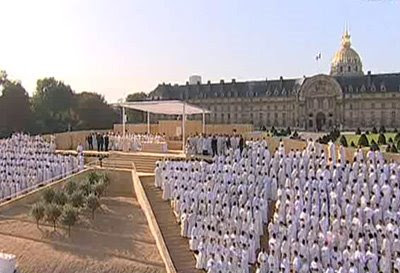 tip to Asia News
Pope: with Christ, flee from the idols that alienate man
Paris (AsianNews) - With a complete overturning of the Marxist theory on religion as the "opium of the people", and of Enlightenment rationalism, on the uselessness of God in life, Benedict XVI today claimed that Christ, the Eucharist, the Mass, help man to free himself from the "idols" that, as in ancient paganism, "constituted a powerful source of alienation and diverted man from his true destiny". And precisely in order to free man from the prison of the idols, the pope invited the young people to follow the call to the priestly and religious vocation.

On the second day of his visit to France, the pontiff celebrated the Mass in the Esplanade des Invalides, with almost 300,000 people: the attendance exceeded all of the predictions, almost as if to disprove all of the theories about the secularization dominating the country, once called the "eldest daughter of the Church".

In his homily, the pope commented on the readings of the liturgy for the feast of of Saint John Chrysostom, one of the greatest fathers of the Church, from the fourth century, who left works of catechesis, liturgy, and theology that are still kept alive in both East and West.

Beginning with the appeal from the apostle Paul to "Shun the worship of idols" (1 Cor. 10:14), the pontiff explained what idols are: "The word 'idol' comes from the Greek and means 'image', 'figure', 'representation', but also 'ghost', 'phantom', 'vain appearance'. An idol is a delusion, for it turns its worshipper away from reality and places him in the kingdom of mere appearances. Now, is this not a temptation in our own day – the only one we can act upon effectively? The temptation to idolize a past that no longer exists, forgetting its shortcomings; the temptation to idolize a future which does not yet exist, in the belief that, by his efforts alone, man can bring about the kingdom of eternal joy on earth! . . . Have not money, the thirst for possessions, for power and even for knowledge, diverted man from his true destiny?"

"Communion with the Body of Christ", the Eucharist, is the means by which we are helped to free ourselves from idols, because we discover the true face of God: "Millions of times over the last twenty centuries, in the humblest chapels and in the most magnificent basilicas and cathedrals, the risen Lord has given himself to his people, thus becoming, in the famous expression of Saint Augustine, 'more intimate to us than we are to ourselves' (cf. Confessions, III, 6, 11)". And again: "The Mass invites us to discern what, in ourselves, is obedient to the Spirit of God and what, in ourselves, is attuned to the spirit of evil". "He alone [Christ present in the Eucharist] teaches us to shun idols, the illusions of our minds".

The urgency of celebrating the Eucharist as an instrument of truth for the faithful and for the world impelled the pope to make an appeal to the young people: "Do not be afraid! Do not be afraid to give your life to Christ! Nothing will ever replace the ministry of priests at the heart of the Church! Nothing will ever replace a Mass for the salvation of the world! Dear young and not so young who are listening to me, do not leave Christ’s call unanswered".

His final invitation was to mission, to communicate the faith in truth and love with those around us: "When we speak, do we seek the good of our interlocutor? When we think, do we seek to harmonize our thinking with God’s thinking? When we act, do we seek to spread the Love which gives us life?"

And he concluded: "I entrust you, dear Christians of Paris and France, to the powerful and merciful action of the God of love who died for us upon the Cross and rose victorious on Easter morning. To all people of good will who are listening to me, I say once more, with Saint Paul: Shun the worship of idols, do not tire of doing good! May God our Father bring you to himself and cause the splendour of his glory to shine upon you! ".

++++++
"Have not money, the thirst for possessions, for power and even for knowledge, diverted man from his true destiny?"
What do you think? Is Pope Benedict XVI correct and if he is have you considered your very own calling (as we all are called) to actively participate in God's mission of redemption?
Posted by David Nybakke at 12:51 PM