Ancient Whisper in the Garden - Truth or Lie? 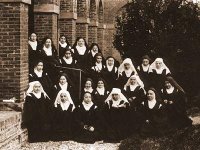 From Prayer for the Morning (February 8) in the Magnificat: Pride sets subtle snares. Whenever we imagine that we are in control of life - our own or someone's else's - we have fallen prey to the ancient whisper in the Garden: "You shall be like gods." Mortality is the enduring reminder that we become like God not by our own power but by the power of the cross.

I came upon the following and see what you think:
A Serpent in the Second Garden: The Plight of Cloistered, Contemplative, and Consecrated Nuns

Some still hear the ancient whisper, even in the lingering, the serpentine shadows of their lengthening years. And to those who give heed in a withering night, it deceives, even now in the end as it did in the beginning – and this is the lie:

“The Second Garden, the Cloister Wall, is a dangerous fiction as was the first promise of God, seducing men and women to believe that the call to prayer and not the clarion to social reform is the remedy of the world; that strident voices, and not sacrificial lives, redeem the world of its evil; that unbridled self-assertion, not humility and silence, assuage the suffering of man.

Tear down the Garden walls! Pull down the Cloister and make the Vineyard of God a brothel of men; predate the Vine and prepare the winepress. Self-fulfillment … not sacrifice! This is what the world craves for, although it is not what the world needs. Like Joseph in the desert, let the dreamers all die. It is the workers who have built the great marvels in Egypt and at so paltry a price as slavery to sin!”

Of what possible use are these dreamers of prayers? What have they accorded you? Better to prevail in suits on the courts of men, than in prayers before the Courts of God.


In an age of unbridled self-esteem and self-assertion, there is no room for Cloisters that hem in the hubris of women and the madness of men.

There is a note of ambiguity in your post, Aramis, that may leave the reader with the impression that you agree with such statements as "The Second Garden, the Cloister Wall, is a dangerous fiction as was the first promise of God, seducing men and women to believe that the call to prayer and not the clarion to social reform is the remedy of the world..."

I know that you indeed DO value the cloistered life. The sister convent to my beloved Holy Cross Abbey, Our Lady of the Angels, prays the hours and works - ora labora - in faithful monastic, communal life. Such "dynamos of prayer," some say, keep the world from destroying itself.

But the social action types, like their secular counterparts, materialistic reductionists, do not see this at all.

To which Athos says, thank God for the monasteries and convents that give us St. Thereses and Thomas Mertons. Their contribution is not only to the Church but to the world ... even if the world rejects them.

Yeah, I got that on the surface read, too, but once I followed the link I could see that it was a splendid article, and then I recognized Aramis' opening voice as ironic.

Dear fellows, the link is crucial to my post and as Porthos discovered, the article really helps one to think about this whole religious life issue that we have been skirting around of late with posts on the Poor Clare's and Saint Therese.

And your comment Athos: "Their contribution is not only to the Church but to the world ... even if the world rejects them."

THERE, there it is, the revelation that Girard has helped us to see through the scriptures and particularly by the Gospels. We get a peek at the truth in the very act of expulsion.

So, the point is to make the reader go to the link, read it carefully, and then understand the irony in your last quizzical "...or is there?"

I get it now. Thanks.