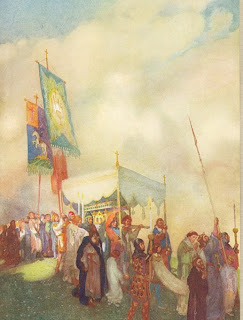 As the attempt to strangle Christian faith, morals, and traditions gathers momentum, from multiculturalism on the ascendancy in the Last Self-Help Administration and left in the United States and the EU on the continent, Christianity in general and the Catholic faith in particular will find itself more and more under siege. The above is the neo-pagan "pincer" confronting Catholic truth, faith, and morals.

"Neo-pagan?" you may ask. "Is it not rather radical secularism in word and deed?"

No, it isn't. Only if one listens to its themes and self-justifying slogans. Observed through a cool, forensic lens of René Girard's mimetic theory, the structural behavior betrays its pagan pomp and ritual, right down to its Molech-like abortuarial cultus.

The other "pincer" attacking the remnants of the Christian West is, of course, the Scimitar. Again, it betrays its claims of "monotheism", let alone being a religion of "peace", by its necessary dependency upon victims for its sacrificial pyres of regeneration.

The two "pincers" are unlikely bedfellows, but both writhe and roil before the revealed faith, morals, and truths of the Church. Both hate (and secretly admire and desire in rivalry's side-long glances) what they can only reject, revile, and seek to destroy. Both are enslaved to this mission of destruction, for both house a collective mind trapped in mimetic rivalry to Catholic truth. As Robert Hamerton-Kelly describes this trapped mind:

If you want to know what is called for in this struggle for the survival of truth in the face of the above "twin pincers," I strongly recommend C. S. Lewis's Prince Caspian, and belonging to a worthy organization of Marian chivalry like Corpus Christianum. Only close proximity to the Blessed Sacrament, fixing oneself to the Barque of Peter, and fortitude born of fealty to the Once and Future King (of whom Arthur is a pale parody) will hold us in Truth, Goodness, and Beauty.
Posted by Athos at 10:07 PM