To Save the West 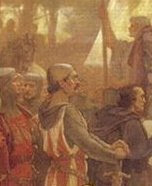 What will save the West is the death of the metromale, God willing. Islamic men have much to teach us and we have much to learn.

Shocked? Let me clarify: about Islamic men, we have nothing to learn from their shame/honor based identities lodged firmly in the primitive sacred, no. Rather, the marked differentiation of male and female roles, a passion for ritual that honors our Creator and concomitantly builds a unity among men, and a love of learning wisdom from the written word. That their a priori presuppositions differ greatly from those of our Catholic world view and theology does not abjure our appreciation of these values, nor keep us from admiring them and plundering them for our use in Marian chivalry.

Indeed, western metromales have become all too much at one with men of the Scimitar except for these fine qualities: honor and shame oriented, remote from disinterested self-sacrifice for the greater good of the commonweal, noncommittal, on the make, hoarders of pleasure moments, self-grandizers, trusters of Mammon, secret self-loathers, grabbers after false transcendence, ontologically challenged in the extreme.

The shining alternative - what the West needs in ever-increasing numbers - is chivalric men. This is not a vain effort to regain a "golden age" of Christendom; no. Rather these men know that God's Kingdom and the Catholic Church needs them - who respect the will of God in making us male and female, imago dei; who are humble and ever deferring before others, courteous to women and children (yet as stern in the upbringing of the latter as they are kind and unprovocative), fierce in defense of the weak and outcast. In short, who want to claim all the best of our Christian culture - not dead but dormant.

We claim allegiance to Our Resurrected Lord, reclaiming the best of chivalric fortitude - and justice, prudence, and temperance. We must reject in large part the spirit of the age which for the past few short centuries has tried to carry out the Second Great Commandment of Our Lord while rejecting and ignoring the First. Enlightenment projects - so-called - lie strewn across history's plain one after the other in this proud and vain effort. And yet they continue even today with the sad, silly refrain, "Yes, we can."

Chivalric men of faith must be bound in fealty to Our Lord and the holder of the keys of Saint Peter - Pope's men all: the utter antithesis of the metromale. The West needs men committed to the Church, to their wives and families, to the greater good. Only this will save the West - the reclamation of the code of Marian chivalry.
Posted by Athos at 2:02 PM