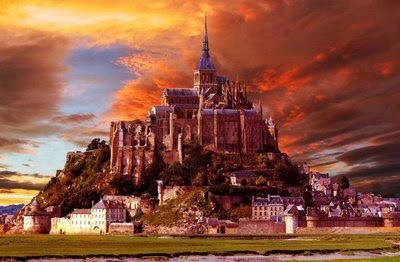 To proclaim that Christians and Muslims have the same God, and to hold to that, believing thereby that one has brought the debate to its term, denotes only a superficial approach. Their Gods do not partake in the same discourse, do not put forward the same values, do not propose for humanity the same destiny and do not concern themselves with the same manner of political and legal organization in human society. The comparative reading of the Gospel and the Koran by itself demonstrates that the two universes are unalike. From Christ, who refuses to punish the adulterous woman by stoning, one turns to see Mohammed ordaining, in the same circumstances, the putting to death of the unfaithful woman. One cannot follow Jesus and Mohammed.

Read all of The West’s Cultural Continuity: Aristotle at Mont Saint-Michel.
Posted by Athos at 6:57 PM