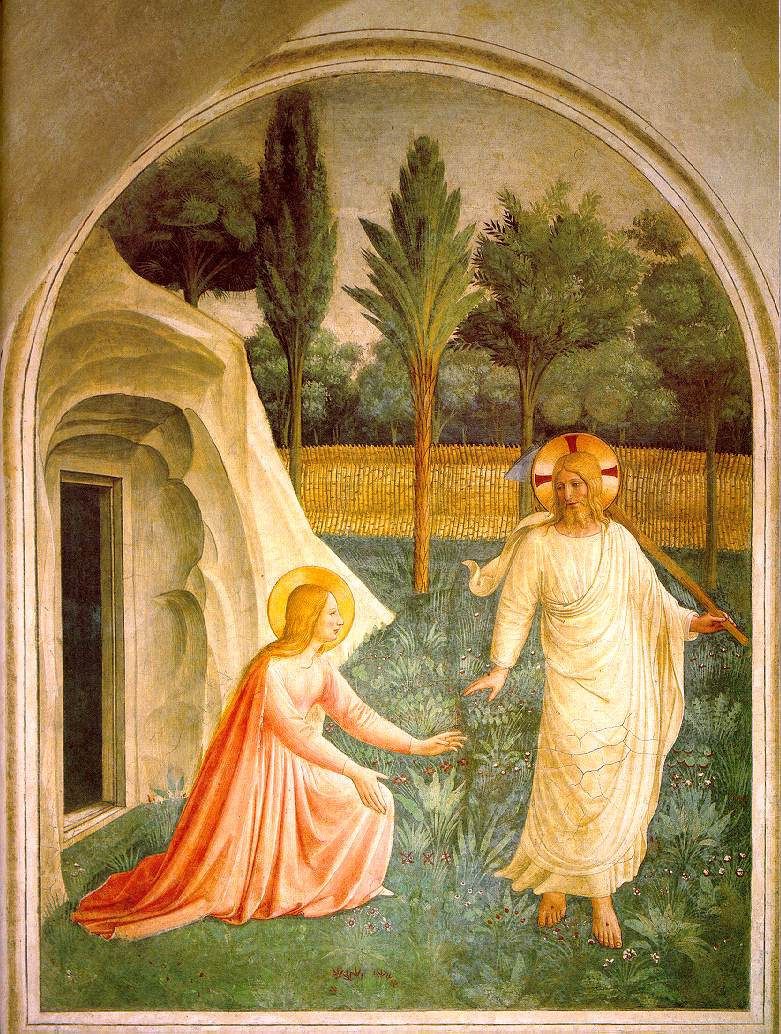 Noli Me Tangere - Fra Angelica
1440-41; Fresco, Convent of San Marco, Florence
From the ridiculous (below) to the sublime. Florentine painter, a Dominican friar, Fra Angelico lived from 1400-1455. Although in popular tradition he has been seen as `not an artist properly so-called but an inspired saint' (Ruskin), Angelico was in fact a highly professional artist, who was in touch with the most advanced developments in contemporary Florentine art and in later life travelled extensively for prestigious commissions. He probably began his career as a manuscript illuminator, and his early paintings are strongly influenced by International Gothic. But even in the most lavishly decorative of them all-- the Annunciation in the Diocesan Museum in Cortona-- Masaccio's incluence is evident in the insistent perspective of the architecture.

For most of his career Angelico was based in S. Domenico in Fiesole (he became Prior there in 1450), but his most famous works were painted at S. Marco in Florence (now an Angelico museum), a Sylvestrine monastry which was taken over by his Order in 1436.

Angelico died in Rome and was buried in the church of S. Maria sopra Minerva, where his tombstone still exists. Vasari, who referred to Fra Giovanni as `a simple and most holy man', popularized the use of the name Angelico for him, but he says it is the name by which he was always known, and it was certainly used as early as 1469. The painter has long been called `Beato Angelico' (the Blessed Angelico), but his beatification was not made official by the Vatican until 1984. [Web Museum]
Posted by Athos at 9:14 AM