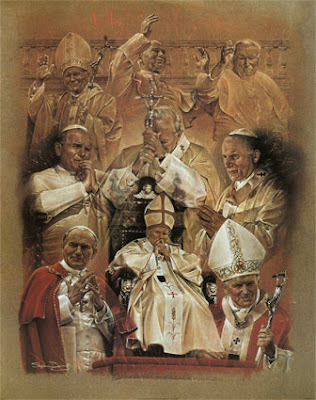 On April 2nd of that year, my wife and I took a trip to Holy Name Cathedral, formally the Cathedral of the Holy Name in downtown Chicago. 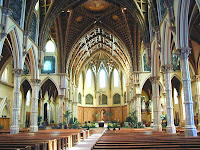 We had never been there and, as we had just completed the RCIA program in our local parish, we couldn't get enough of anything that was Roman Catholic, and that is still true today.

Oh what beauty we found ourselves in. Once inside we made our way to one of the front pews and noticed a group of people over to the left of the altar. A baptism service was just about to begin. It was for a young Mexican-American little boy named Sebastian. The priest was fluent in both Spanish and English, and he had a gift for making everyone feel a part of this special moment. He went around the family and asked each their name and gave a short history and meaning of each name, some of this was in Spanish and some in English. We learned that Sebastian meant venerated or majestic.

Then at one point early in the proceeding, around 1:45pm CST, the priest made THE announcement; that as we are here in The Holy Name Cathedral in downtown Chicago celebrating this very special baptism, a true blessing of the Church, on the other side of the planet, Pope John Paul II had just past away. With that he paused ever so slightly and then continued on with the ceremony.

The news was not surprising to us, we knew that Pope JPII was in failing health, and so we sat there in silence, rosary in hand and tears rolling down our cheeks. Some time after the baptism we got up to leave, only to be stunned to see a near packed cathedral, as people, in reverence and silence, had filled the pews. When we got outside there were TV trucks and camera crews looking to capture a sound-byte from anyone on their reaction to the news of the Pope’s death (not of course little Sebastian's baptism). We slipped past all that and ducked into a small sidewalk café before heading back home. While we were in the café a TV was on and we watched the news - and there in this small café in downtown Chicago we learned so much more about our faith and our Church, that before this time, we hadn’t a clue.

As I said, April 2nd that year was a week after Easter. I know this because I had just completed the RCIA program and was still unable to participate in full communion that Easter due to the delay that my dioceses had in sending my Privilege of Faith paperwork to Rome. The death of JPII was now going to delay my entry into the Church even more.

Well, my paperwork finally came through and on a glorious evening in November 2005, I was confirmed and my wife and I celebrated a renewal of our wedding vows in the Catholic Church; all this on her birthday. What a blessing.

By the way, today, April 2nd is my birthday and I wonder about little Sebastian and how he and his family are doing. I pray that they are well.
Posted by David Nybakke at 11:08 AM

Wait, I mean: I hoiste a tankarde to ye olde byrthdaye, good Aramis, and tis a gloriouse tale ye telle!

And, a hale and hearty birthday blessing to ye from me as well, brother!

It is mete and right to pass this along (via the Anchoress), from the Franciscan Sisters of Christian Charity: Bruce Cockburn has allowed the good Sisters to download his song, ”God Bless the Children”.