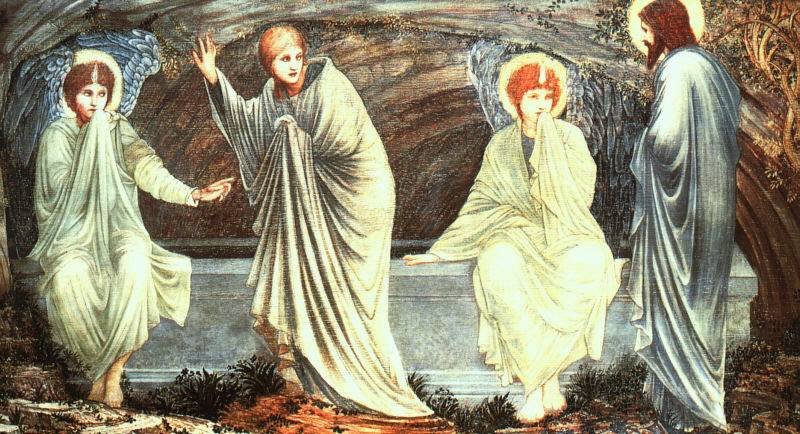 The Morning of the Resurrection - Sir Edward Coley Burne-Jones
Posted by Athos at 5:59 AM

To get this on the record: Father Raniero Cantalamessa, Pontifical Household preacher, said about history and Easter faith [2004-4-7]:

"There are two facts that offer themselves for the historian's consideration and permit him to speak of the Resurrection: First, the sudden and inexplicable faith of the disciples, a faith so tenacious as to withstand even the trial of martyrdom; second, the explanation of this faith that has been left by those who had it, that is, the disciples. In the decisive moment, when Jesus was captured and executed, the disciples did not entertain any thoughts about the resurrection. They fled and took Jesus' case to be closed.

"In the meantime something had to intervene that in a short time not only provoked a radical change of their state of soul, but that led them to an entirely different activity and to the founding of the Church. This 'something' is the historical nucleus of Easter faith."

In this regard, Father Richard John Neuhaus relates this conversation early in his book, Catholic Matters - Confusion, Controversy, and the Splendor of Truth. He and another had just knelt and prayed in Saint Peter's Basilica, within sight of the late, great Pope John Paul II's body lying in state. Fr Neuhaus writes,

Walking out of the basilica into the sunlight, a shaken friend said, "That wasn't him, he isn't there." No, I said, he is there. These are the remains, what is left behind of a life such as we are not likely to see again, awaiting with all of us the resurrection of the dead, the final vindication of the hope that his life, and his death, so powerfully proclaimed. [3]

To die, to leave these poor, fragile bodies is no disgrace, no shame. They testify to the non-gnostic, biblical, incarnational truth as to why matter matters, as David P. Lang reminds all of us in his book sharing the same words as its title.

That Jesus returned in a resurrected body, not some hovering, fleshless spirit, ate, was touched by Thomas, spoke, shows that matter will be vindicated. Redeemed by his victory. We commend ourselves, our souls, our bodies to this blessed Easter hope, now and forevermore. +

Yeah, but you can't dance to it!