Peering Into the Abyss 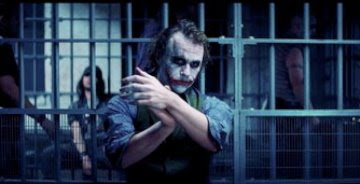 From New Oxford Review's contributing writer Maria Hsia Chang, Professor Emerita of Political Science at the University of Nevada, Reno, and Adjunct Professor at the Dominican School of Philosophy and Theology, Graduate Theological Union, in Berkeley, California, during the 2008 spring semester. When a man looks into an abyss, the abyss also looks into him.

"I THINK THE JOKER KILLED HEATH LEDGER." So writes licensed attorney and former public defender Jay Gaskill in his review of The Dark Knight. Gaskill is not being melodramatic; he is simply stating what other reviewers only hint at.

The Dark Knight, the latest Hollywood incarnation of the superhero Batman, broke records for best opening weekend at $158.4 million. The movie ranked top in box-office sales for four consecutive weekends, pushing its domestic total to a staggering $461 million, and making The Dark Knight second only to the all-time box-office champion The Titanic.

No doubt, many went to see The Dark Knight out of a macabre curiosity because of the untimely death of one of its lead actors. On January 22, 2008, six months before the movie's opening, Heath Ledger was found unconscious in his Manhattan apartment. Paramedics called to the scene could not revive him. The medical examiner later determined that the 28 year old had died from an accidental overdose of prescription drugs -- a lethal brew of sleeping pills, anti-anxiety medication, and the painkillers oxycodone and hydrocodone.

Reviewers have lauded The Dark Knight for its fine acting. In particular, Ledger's "electrifying" performance is singled out for praise; there is increasing talk of a posthumous Academy Award. His face caked with moldy makeup, with black-shadowed eyes, a red-smeared mouth, and yellowing teeth, Ledger's character, the Joker, is more than a sociopathic master criminal. Instead, reviewers use the language of the supernatural, calling him "demonic" and "diabolical" -- "a hound fresh out of hell," "a vivid, compelling picture of naked, nihilistic evil…with almost preternatural power," "a truly frightening vision," and "like Satan." Michael Caine, who plays Batman's butler Alfred, said that he found Ledger's performance so terrifying and disturbing that he sometimes forgot his lines.