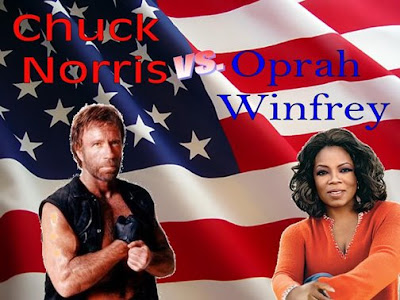 The reason (Eckhart) Tolle's psychology and spirituality is marketed so easy is that it is an eclectic mix of conventional and unconventional wisdom, and Western and Eastern beliefs, presented in a tolerant, non-threatening, and non-sectarian way. In other words, it's "Religion Light," in which one can be spiritual with "little down and no credit."

Chuck continues with a plug for a new book, "Do Hard Things" by the twins, Alex and Brett Harris. They write about "a growing movement of Christian young people who are rebelling against the low expectations of their culture by choosing to "do hard things" for the glory of God." If you give this matter the reflection it deserves, you will discover that this Christian desire to serve God in all things, runs counter to the relativistic view espoused by Tolle and now endorsed by Oprah.

My battle is not with Oprah – she has her guru (Tolle), and I have mine (Jesus). The real war is between those who espouse to be bearers of the truth, like Tolle and Jesus. And the question is: With contradicting truths, will we believe a mere man or one who claimed to be so much more?

And he goes on to quote C.S. Lewis:

A man who was merely a man and said the sort of things Jesus said would not be a good moral teacher. He would either be a lunatic – on a level with the man who says he is a poached egg – or else he would be the Devil of Hell. You must make your choice. Either this man was, and is, the Son of God: or else a madman or something worse. You can shut Him up for a fool, you can spit at Him and kill Him as a demon; or you can fall at His feet and call Him Lord and God. But let us not come with any patronizing nonsense about His being a great moral teacher. He has not left that open to us. He did not intend to. Norris concludes: Again, the question is: Will we turn from what's easy, what's new, what's popular, what's even "Oprah" and take a step back and rediscover the answers that have been there all along? As C.S. Lewis also said, "We all want progress, but if you're on the wrong road, progress means doing an about-turn and walking back to the right road; in that case, the man who turns back soonest is the most progressive."

tip to Athos at Chronicles of Atlanits
Posted by David Nybakke at 2:15 PM