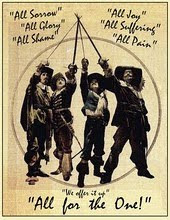 What a wonderful occasion of providential faith and hope and charity. After an hour and one-half of dealing with a "home health nurse" and my apparent prime directive, who should show up at my doorstep but fellow Mass'keteer, young D'Artagnan (graphic artist of the above) and Lady Dawn Eden! Each bore not only lunch-for-one (for herself; D'Art and I had eaten) but other fine, fine gifts and delights.
And for the next two and one-half hours, old Athos was bathed and swathed in such milk of human kindness, Christian friendship, and called-out-of-the-world-of-woes extradition that he thought he had somehow missed that rending of soul from body and been taken directly to the third heaven of what our brother Saint Paul speaks:
"I know a man in Christ who fourteen years ago was caught up to the third heaven. Whether it was in the body or out of the body I do not know—God knows. And I know that this man—whether in the body or apart from the body I do not know, but God knows— was caught up to paradise. He heard inexpressible things, things that man is not permitted to tell." (2 Corinthians 12:2-4)
We chatted about books (ours and others') and new projects, one of which will take one of us far afield. We walked down to a nearby park and strolled next to a meandering stream. And then - the ceremonial exchanging of gifts!
Goodness! Lady Dawn, ever a keeper of what Tolkien called in hobbit terminology, mathom, brought out from her storehouse things old and new. And let us say, gentle reader, that D'Artagnan and Lady Dawn did not leave Athos' humble dwelling empty-handed. The former received in token of the chivalry which all of the Mass'keteers share in common brotherhood, and the latter is covered, though not yet blessed, in four-ways most blessed for her continuous deeds of errantry and pitched battle against the wicked and snares of the devil.
Can heaven come down and touch earth in any way more acceptably and nobly all of a Monday afternoon? Answer: Yes. For, before D'Artagnan and Lady Dawn left, we joined in prayer under the divine sign of the Most Holy Trinity and - gasp! - blessedly in the reliquarial presence (1st order) of Saint Dominic, compliments of a religious' gift to Lady Dawn in the wee hours at Notre Dame. D'Artagnan said he felt the great saint's hand on his shoulder as we knelt and prayed ...
May you have such an encounter with the true, good, and beautiful, gentle reader. And I will recount the deeds of two great friends and their superabundance of charity for long ages to come.
P. S. - Life is sweet and good if besides hosting friends like the above, one can field a phone call of concern on a Sunday afternoon, too, from a great friend, mentor, and all round great guy who now, again, lives in California.
Posted by Athos at 4:30 AM

twas a delight and honor for this, the "simplest" of Mass'keteers, to walk beside two such as Athos and the fair Dawn . . .these children of God who's hearts and smiles are even bigger than their intellects (and that's saying sumpin', brothers and sisters!).

All I can say is Praise God!, and next time SEASIDE!!!