Why the Atonement - Girard 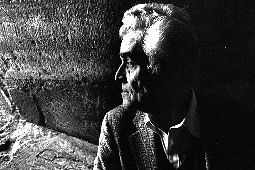 René Girard
In his book on C. S. Lewis and Ronald Knox, Fr Milton Walsh relates Lewis's skepticism prior to his conversion. Walsh writes:
(Lewis) could not see how the life and death of "Someone Else" two thousand years ago could help us here and now, except as an example: "And the example business, tho' true and important, is not Christianity: right in the centre of Christianity, in the Gospels and Saint Paul, you keep on getting something quite different and very mysterious expressed in those phrases I have so often ridiculed ('propitiation' - 'sacrifice - 'the blood of the Lamb') - expressions which I could only interpret in senses that seemed to me either silly or shocking" ...
How can the suffering of one person atone for the sins of another? Knox admits that many people consider such an arrangement immoral, and Lewis comments that there have been many theological explanations for this core conviction of Christianity, some more valuable than others. (85, 87)
René Girard unveils humanity's deep, dark secret which he explicates in his "mimetic theory." This secret is that human culture is built squarely upon a "single victim mechanism" and it is the unique work of the Gospel in history to bring an end this secret's satanic reign.
But this foundation of human violence was so vital to the construction and maintenance of human culture - re-enacted each time victims were arbitrarily selected and expelled and/or murdered - that for aeons there was no alternative. The "lamb slain since the foundation of the world" (Rev 13,8) was the default way to manufacture human cultural cohesion; the "lowest common denominator" of human society.
Without gainsaying any teaching of the Catholic Church regarding atonement, Girard showed not so much how our Lord's death brought about salvation, but why it needed to happen. It happened because human sin always - always - takes us back to the same place: the place of expelling the victim and scapegoating violence. The way that God chose to reveal and break the inner workings of our satanic (literally: Satan - Σατάν - "the accuser") method of convening had to be to go to the place our sin always took us - the place of sacrificial violence - and undo Satan's power once and for all.
Posted by Athos at 7:12 PM