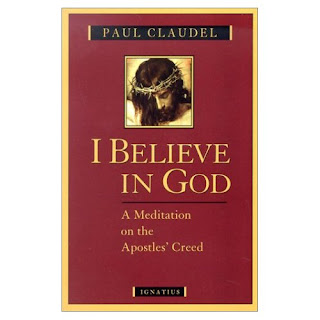 She hears and understands what the Father tells the Son in heaven, and its echo lies in the heart of the Son.
She does not simply understand; she incarnates; she elaborates an image; she is the mother of God.

Through the action of the Holy Spirit, it is she who produces God, who makes him accessible, who transforms him and presents him whole to our flesh and our eyes. It is she who provides us with Christ as a complete man. It is she who embraces the Father in all the force of his generative power so that he begets Christ not just once, but endlessly, in the heart of each Christian…

It is Mary who, in the name of humanity, fully answers God’s call, that “Where are you?” which reverberated through the Garden of Eden after the fall of man. “where are you?” asks the grief-stricken Father. As for the blind creature who is victim of that pride to which he yielded with passionate reluctance—he poor creature, cannot check the desperate query that comes to his lips: “You, Father, where are you?”

If someone will only show us the father, it will be enough!

And lo, a great cry rings out; it is the voice of a woman, a Virgin: “I found him whom my soul loves...and would not let him go” (Sg 3:4). I have found him so utterly that never again will he succeed in ridding himself of me. I hold him; I withhold him; I contain him—how shall I say it?—it is he who contains me. I am the stem from whom, before the eyes of nations, he borrows root, stature, life, personality, and speech!

- I Believe in God: A Meditation on the Apostles' Creed by Paul Claudel (1955) was a French poet, a playwright, a diplomat, and a member of the French Academy.