I can't help but to include this account on Saint Martha as I have a dear friend whose family is from Marseille France which is just down the road from the town where St. Martha is celebrated along with the legend of the dragon. 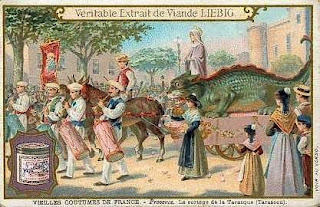 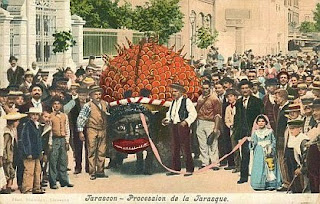 St. Martha -- the Lord's worker and servant, the sister of Saints Mary Magdalen and Lazarus (all three of whom "Jesus loved" as we see in John 11:5) -- is only mentioned in three chapters of the Bible, but her character comes through clearly.

Where Scripture leaves off, tradition steps in. We are told that Saints Martha, Mary Magdalen, and Lazarus went to southern France in A.D. 48, where St. Mary Magdalen retired to a life of penance, and St. Lazarus acted as Bishop of Marseilles. St. Martha's life in Europe was a very interesting one according to the Golden Legend:


After the ascension of our Lord, when the disciples were departed, she with her brother Lazarus and her sister Mary, also S. Maximin which baptized them, and to whom they were committed of the Holy Ghost, and many others, were put into a ship without sail, oars, or rudder governail, of the paynims, which by the conduct of our Lord they came all to Marseilles, and after came to the territory of Aquense or Aix, and there converted the people to the faith. Martha was right facound of speech, and courteous and gracious to the sight of the people.

There was that time upon the river of Rhone, in a certain wood between Arles and Avignon, a great dragon, half beast and half fish, greater than an ox, longer than an horse, having teeth sharp as a sword, and horned on either side, head like a lion, tail like a serpent, and defended him with two wings on either side, and could not be beaten with cast of stones nor with other armour, and was as strong as twelve lions or bears; which dragon lay hiding and lurking in the river, and perished them that passed by and drowned ships. He came thither by sea from Galicia, and was engendered of Leviathan, which is a serpent of the water and is much wood, and of a beast called Bonacho, that is engendered in Galicia. And when he is pursued he casts out of his belly behind, his ordure, the space of an acre of land on them that follow him, and it is bright as glass, and what it toucheth it burneth as fire.

To whom Martha, at the prayer of the people, came into the wood, and found him eating a man. And she cast on him holy water, and showed to him the cross, which anon was overcome, and standing still as a sheep, she bound him with her own girdle, and then was slain with spears and glaives of the people.

The dragon was called of them that dwelled in the country Tarasconus, whereof, in remembrance of him that place is called Tarasconus, which tofore was called Nerluc, and the Black Lake, because there be woods shadowous and black. And there the blessed Martha, by licence of Maximin her master, and of her sister, dwelled and abode in the same place after, and daily occupied in prayers and in fastings, and thereafter assembled and were gathered together a great convent of sisters, and builded a fair church at the honour of the blessed Mary virgin, where she led a hard and a sharp life. She eschewed flesh and all fat meat, eggs, cheese and wine; she ate but once a day. An hundred times a day and an hundred times a night she kneeled down and bowed her knees.