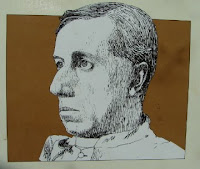 TODAY, WHEN THE WORLD has become so fuddled with its own philosophies that men cannot be sure whether two and two really make four, whether black is not really white under another aspect, they all agree on one thing -- that the Catholic religion can't be true. They will tell you one moment that it is impossible to discover whether truth exists, and the next moment that the Catholic religion is certainly false -- such is their logic. The Catholic religion must obviously be a deception, because it claims to know what is true.
-- Ronald Knox
Posted by Athos at 12:43 PM