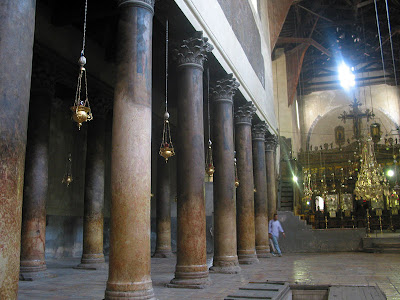 The Christian faith was beget of the same Lord Who gave and established His Church upon Saint Peter. It is an historic faith. G. K. Chesterton gives an incomparable description of the historic nature of the Catholic Church in his entering the Church of the Nativity, Bethlehem. From his New Jerusalem:

As familiarity turns the darkness to twilight, and the twilight to a grey daylight, the first impression is that of two rows of towering pillars. They are of a dark red marble; and they are crowned with the acanthus in the manner of the Corinthian school. They were carved and set up at the command of Constantine; and beyond them, at the other end of the church beside the altar, is the dark stairway that descends under the canopies of rock to the stable where Christ was born.

Of all the things I have seen the most convincing, and as it were crushing, were these red columns of Constantine. In explanation of the sentiment there are a thousand things that want saying and cannot be said. Never have I felt so vividly the great fact of our history; that the Christian religion is like a huge bridge across a boundless sea, which alone connects us with the men who made the world, and yet utterly vanished from the world.

Not in vain had Constantine come clad in purple to look down into that dark cave at his feet; nor did the star mislead him when it seemed to end in the entrails of the earth. The men who followed him passed on, as it were, through the low and vaulted tunnel of the Dark Ages; but they had found the way, and the only way, out of that world of death, and their journey ended in the land of the living. They came out into a world more wonderful than the eyes of men have looked on before or after; they heard the hammers of hundreds of happy craftsmen working for once according to their own will, and saw St. Francis walking with his halo a cloud of birds.