The Mass - Something Greater is Happening Here

From The Magnificat September 13, 2010
Saint John Chrysostom was born in Antioch about the year 349. After an extensive education he embraced a life of asceticism. He was ordained a priest and distinguished himself by his preaching which achieved great spiritual results among his hearers. He was elected bishop of Constantinople in 397 and proved himself a capable pastor, committed to reform- ing the life of the clergy and the faithful. Twice he was forced into exile by the hatred of the imperial court and the envy of his enemies. After he had completed his difficult labours, he died at Comana in Pontus on September 14, 407. His preaching and writing explained Catholic doctrine and presented the ideal Christian life. For this reason he is called Chrysostom, or Golden Mouth. 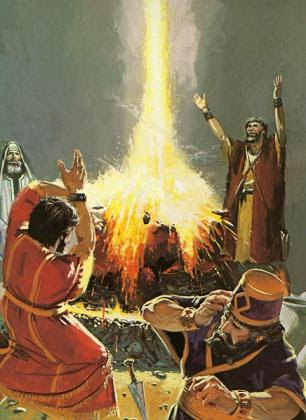 The liturgical service takes place on earth, but it belongs to the realm of heavenly realities. In fact it was not instituted by a human being or an angel, but by the Spirit himself, so that those who are still living in the flesh should think of performing the service of angels.
O what mercy, O what love of God for human beings! Christ who is seated with the Father in highest heaven is at that moment grasped by the hands of all and does not hesitate to give himself to anyone who wants to embrace him and be bound to him. 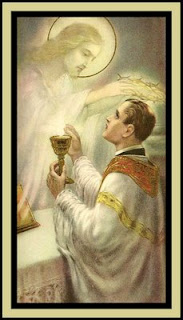 He whom the eyes of faith perceive is possessed by everyone. You remember how Elijah was surrounded by a great crowd and had in front of him the victim for sacrifice placed on the stone (see 1 K 18). Everyone stood stock still. The silence was complete. Only the prophet raised a prayer. Suddenly from heaven came down fire on the victim. It was a marvellous spectacle that filled everyone with amazement.
Here, however, something much more than a marvellous spectacle is unfolded. Something is happening that is greater than any marvel. Here the priest draws down not fire but the Holy Spirit himself.
Theology:
SAINT JOHN CHRYSOSTOM Saint John Chrysostom († 407) was a famed preacher and commentator on Scripture.

Now let us add anthropology to this reading:
René Girard René Girard scrutinizes the human condition from creation to apocalypse.

(René Girard) began to see the Bible as "anti-myth"—a description of humankind's long climb up from barbarity. Violence, retaliation and a vengeful God evolve over centuries into themes of forgiveness, repentance and the revelation that the scapegoat is innocent, culminating in the Crucifixion.

Read more HERE!
"Something is happening that is greater than any marvel. Here the priest draws down not fire (the mob's violence) but the Holy Spirit himself."
Posted by David Nybakke at 9:51 AM

Aramis, your "Read more HERE" doesn't have a link (yet)?

Thanks Ath for catching that. I made a couple small updates to the post as well.