Postscript to an Atheist Friend 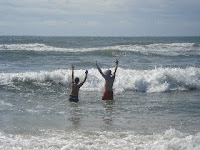 Having spent a delightful week in the string of barrier islands off the coast of North Carolina known as the Outer Banks, I am pleased to offer up beginning tomorrow an experience known as "chemotherapy". Probably the best online resource on the latter can be found here.
I spent some time with an old acquaintance there, a self-designated atheist. Interestingly, he went to the bother of "becoming ordained" so that he could perform weddings (which he has), yet he has abandoned, seemingly, the institution in his personal life.
Like so many such atheists, he sees a major issue to be one of authority. Where does a mainline Christian pastor get his or her authority? Where does the Pope? He asked these questions, clearly brandishing his "ordination" as carrying as much authority as either of these (being a relativist as well as atheist). Of course, we Catholics can guide any such questioner to the sixteenth chapter of St. Matthew when Our Lord proclaimed Simon to be kephas / Πέτρος ("Rocky") and "on this rock," said He, "I will build my Church" (18-19). Catholicism is historical; Benedict XVI stands as our 265th pontiff since St. Peter.
Now, my atheist friend has several presuppositions that keep him from acknowledging such biblical authority, most of which were laid to rest as unsubstantial in epistemology by the great British Catholic thinker - some say the greatest mind to come through Eton and Oxford - Monsignor Ronald Knox (and others). But he still gives credence to "higher criticism" of liberal schools of thought, like, for example, the so-called "Jesus Seminar." Let us just say that authority for them comes from whomever thinks and sees things their way; i.e., the scriptures they see as "authentic" prove that Jesus, as it turns out, was a Jesus Seminarian!
Let me say, in the hope that my old friend will possibly read this post: authority is posited from a much higher and substantive source than one's individual opinions and life experience. We are created, finite, and mortal. We will answer to the One from whom we have our lives on-loan, ontologically speaking. And the Catholic Church has and provides the greatest and most coherent explanation of our lives, our purpose here on earth, and, please God, our ultimate telos.
For further information, Philip, please pick up a copy of A Little Guide for Your Last Days, here or here. Or, if you have no desire to shell out twenty bucks, perhaps you will find something of edification in my favorite post, here (pardon the title, if you will). Best, old friend.
Posted by Athos at 8:02 AM

"Like so many such atheists, he sees a major issue to be one of authority." I can completely relate to that quote in every possible way.

Those with major issues with authority are those caught in the web of multiphrenia. From Gil Bailie's "The Subject of Gaudium et spes" The lived experience of the postmodern self, Kenneth Gergen seems happy to announce, is multiphrenia. He writes:
As one casts out to sea in the contemporary world, modernist moorings are slowly left behind. It becomes increasingly difficult to recall precisely to what core essence one must remain true. The ideal of authenticity frays about the edges; the meaning of sincerity slowly lapses into indeterminacy. And with this sea change, the guilt of self-violation also recedes. As the guilt and sense of superficiality recede from view, one is simultaneously readied for the emergence of a pastiche personality. The pastiche personality is a social chameleon, constantly borrowing bits and pieces of identity from whatever sources are available and constructing them as useful or desirable in a given situation.

A dangerous and sad state to be in.

Jeff, I'm sorry it's taken me a month to find your post, but my point about ordination has to do with the state, not the church. The state recognizes virtually any ordination. That is because the state is not in the business of deciding which church credentials are valid, and which are not (let's hear it for the separation of church and state). The state recognizes the Roman Catholic priest and the protestant minister (even the preacher in a small clapboard chapel in the mountains with no affiliation with any other church or denomination) as well as the clergy of other faiths. If they all have "authority" as far as the state is concerned, then ordination by the ULC also has authority...no less than the pope as far as our government is concerned.

Now about Matthew 16 -- Why should I accept the authority of this Bible text? It is a simple question. Can you give me a simple answer? Or a complex answer for that matter. Why not appeal to the Book of Mormon? Or the Koran? I think this is a legitimate question that deserves a thoughtful answer.

Finally, why am I thought to be in a "dangerous and sad state?" I certainly disagree with that assessment. Is "Aramis" referring to my present life, or my presumed eternal life in Hell? It is interesting to note that quite a number of other "believers" (believers in a different world view) think that Roman Catholics are in a dangerous and sad state.

It all seems rather myopic to me.

Philip - As far as Matthew 16 goes, the authority of the Scriptures - whose scriptures - is indeed a matter, ultimately, of faith. But for many of us already convinced of the guiding Spirit behind the Judeo-Christian Scritpres as young persons coming from an Evangelical Christian background, it does not take much to see and affirm the Catholic claim.

Claim to what? A com-box isn't the place for the argument, but first among all is claim to the ontological superiority of Jesus as the Second Person of the Blessed Trinity and revealer to humanity of the will and nature of God the Father.

Your answer to His question, "Who do you say that I am?" will tell reams about your faith, or lack thereof, regarding the Church's claim to both the authority of Jesus Christ and the authority of the Catholic Church.

The canon of the New Testament is not really questionable, nor its contents, being approved by the Councils of Hippo and Carthage - the bishops of the Church, that is - in the closing years of the 4th century. Even Protestant churches affirm this canon. The Mormons, as you lift up, do not; they even re-word to meet their specifics.

The myopic concern goes both ways. What of a fellow whose notion of acceptable authority being a 'closed canon' of his recently deceased relatives, say, to the fourth generation of grandfathers? That seems a bit myopic, historically, to me.

Jeff, your statement, "The canon of the New Testament is not really questionable, nor its contents, being approved by the Councils of Hippo and Carthage," strikes at the heart of the matter. This is simply an argument from authority, an inductive fallacy. It is a fallacy because the authority is considered exempt from criticism.

And then you say, "What of a fellow whose notion of acceptable authority being a 'closed canon' of his recently deceased relatives, say, to the fourth generation of grandfathers?" I can only guess that this was tongue-in-cheek??

On a more personal note, I send my wishes for healing...and especially healing with minimal reactions. It was good to see you this summer.

As Ronald Knox said to Arnold Lunn in their argument of a similar nature, I bow to your logic, Philip. Unfortunately for us human beings, logic won't get us out of the worse dilemma of living in what gives a plethora of evidence of a fallen world, the prime exemplar being humanity itself. The best to you and your loved ones, too.