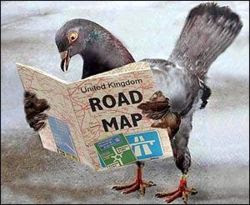 The following little story comes from our St John the Baptist Franciscan province newsletter about the brothers Father Ric and Father Aquinas Schneider.

When the Schneiders were growing up in Louisville, Ky., “Our Dad got homing pigeons for us and we used to race them,” Aquinas says.

At one time, Ric says, “We had 70 or 80.” Each summer their parents would plan “mystery trips” for the family. The number of kids who went (there were 11 of them) depended upon the number they could fit in the car. “It was always by turn,” Ric says. “Not everybody got to go.” Dad also took along a couple of pigeons. When he pulled over for the night on the first leg of the trip, “He would put a note [with their location] on the leg band of the pigeon and send it home,” says Aquinas. Ric remembers how eagerly the kids in Louisville waited for news from the road. “We’d be sitting in the back yard, waiting for that bird to come in.” When the pigeon arrived with its note, “We’d get a map and see where Dad had gone that day.” For the kids who couldn’t go, it was a lesson in geography – and a way to make them feel included.
Posted by David Nybakke at 6:36 PM