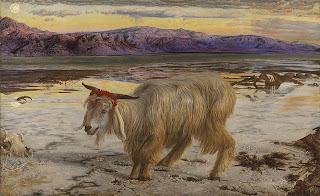 The Scapegoat (1854) - William Holman Hunt
What I have learned from René Girard's mimetic theory is that when there is sufficient social and psychological turmoil, crowds start looking for a scapegoat. From the viewpoint of the Christian faith, we would say this is a primary piece of evidence of the Fall, a common blind spot rooted in our disobedience to the will of God thematized in the Doctrine of Original Sin.
In traditional societies, what Girard calls the "single victimary mechanism" was an extremely economic way of re-establishing peace and harmony in the community. It nearly always only took one victim; "unanimity minus one," as he says. Or, as Caiaphus said in John 11, 50: "Better that one should die than the whole nation be destroyed."
But, as Robert Hamerton-Kelly reminds us, the Gospel has been at work in history for about 2,000 years. We have to perform capital punishment behind prison doors in the wee hours now, lest sympathy for the executed rouse even more turmoil. Gone are the days of a good hangin' in the town square after a picnic and before the fireworks display.
Now, Hamerton-Kelly says, the sacrificial mechanism in fallen humanity tries to work by raising the number of victims, or the prestige of the victim: genocide or regicide.*
Enter our newest attempt at scapegoating; namely, the Holy Father. Ah, the ravenous wolves are circling via the New York Times and other liberal organs. Voices of reason notwithstanding, the ignorant taunts of the mob howl, wanting their victim.
Even if Joseph Ratzinger knew the abusive priest was re-assigned under his jurisdiction, note well that these accusatory voices are (a) illogical insofar as their own liberal, progressivist platform would not call intergeneration same-sex activity a "crime" but merely "alternative lifestyle;" (b) oblique to their own heroes' similar shortcomings. But they want their sacrificial victim.
Problem is, however, the truth does not matter to them. Nor ever does it to the sacrificial mob; whether it is street rabble in Iran or the op/ed offices at 620 Eighth Ave., NY, NY.
They want their sacrificial victim, and the Holy Father has the most prestige.
So far.
UPDATE: Gerald Warner: It's the Pope's turn
*This is so in western cultures influenced by the Gospel. In those not influenced by the Holy Spirit, individuals are still accused and indicted; i.e., "witches", "infidel", etc.
Posted by Athos at 2:00 PM