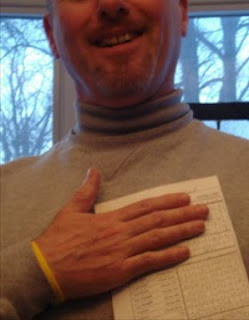 Here is a photo of fable and legend. One sees the Livestrong bracelet, the smiling, bearded face. But the stuff of legend is on the Yahtzee score-keeping card, the craggy pinnacle of Yahtzee-dom, a score of 616.
Long Lady Athos held the top two scores - the Gold and Silver on the Olympic podium - scores in the low to mid-500's, while I, the dutiful husband was content with a third-place Bronze at 500 even.
Weeks past and turned into months. After dinner games melded one into another. Long did Athos maintain that attentive savoir faire, gamesmanship, and ... je ne sais quoi (think Bill Murray half-way through his purgatorial ordeal in Punxsutawney).
Then, lo and behold and four - count 'em, four - yahtzees in a single game catapulted Athos up and over all others who, with much wailing and gnashing of teeth, ceded first place. (The photo is during the playing of the national anthem.)
Praise and rejoice greatly, O Israel. Thy babylonian captivity is ended. Now ... ahem ... back to Lent.
Posted by Athos at 10:20 AM

I've never played Yatzee! But you sure make it seem like it might be a fun competition for my dh and me!