Praying for 'This Generation' 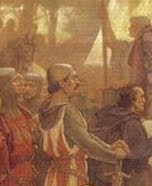 When our Lord describes his generation, what simile does He use? He says in Luke 7,32:
"To what then shall I compare the men of this generation, and what are they like? They are like children sitting in the market place and calling to one another, `We piped to you, and you did not dance; we wailed, and you did not weep.'"
And that was only His generation. Or, was it only His generation? Elsewhere in Matthew 12, 39b-45, He describes the plight of a man who believes he can, on his own, whisk clean his "house" of evil spirits:
"An evil and adulterous generation seeks for a sign; but no sign shall be given to it except the sign of the prophet Jonah. For as Jonah was three days and three nights in the belly of the whale, so will the Son of man be three days and three nights in the heart of the earth. The men of Nin'eveh will arise at the judgment with this generation and condemn it; for they repented at the preaching of Jonah, and behold, something greater than Jonah is here ... "When the unclean spirit has gone out of a man, he passes through waterless places seeking rest, but he finds none. Then he says, `I will return to my house from which I came.' And when he comes he finds it empty, swept, and put in order.
Then he goes and brings with him seven other spirits more evil than himself, and they enter and dwell there; and the last state of that man becomes worse than the first. So shall it be also with this evil generation."
Gil Bailie posits that what our Lord means by "this generation" is "business as usual" in terms of how culture is always generated among fallen human beings, the taxonomy of which is most clearly spelled out by René Girard's mimetic theory, a worthy tool in the hands of the Church's Magisterium. (For example, cf. especially the work and homiletics of Father Raniero Cantalamessa, ofmcap.)
"This generation" is what Satan offers our Lord during His temptations in the wilderness (Mtt 4,8ff).
The staggering thing is to be living and moving and having our being as people who affirm Jesus Christ and His Catholic Church among leaders of nations, industry, and global policy who are plainly and willfully citizens of "this generation." They cannot begin to accept the beliefs of the Church's deposit of faith, the Magisterium, and lordship of Jesus Christ. And so, they are like the cleaner of the evil spirit; like children in the marketplace - all cleaned up and so blindly naive to the realities of Satan in their lives, their thinking, their politics and policies.
Good reason to pray during this season of Lent. Very good reason. And very good reason to join in-arms in Marian chivalry in this godless age in need of the hope and glory our Lord offers.
Posted by Athos at 8:04 AM