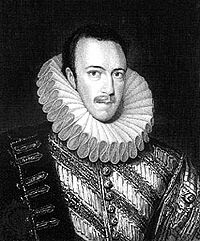 Bl Philip Howard - Earl of Arundel
On the brink of the New Year, some can look on our human cultural scene with optimism (they call it 'hope' - it seems a bit shallow to go that far), some with a sense of gloom. I will, instead offer the words of my newest mentor, Monsignor Ronald Knox (1888-1957), that come from his reflections on one of the English martyrs, Blessed Philip Howard.
THE PRISONER'S LOT, AFTER all, is a type, especially, of human life as it has to be lived by us Christians in a fallen world which is not our true home, only a place of detention. Every man born into this world lives in a condemned cell; the warrant for his death will be issued not at an hour of his own choosing. Meanwhile, the environment of his life, his social ties, his limited opportunities, interfere with his liberty of action; when all is said and done, he has little of real freedom. And we Christians, whose faith forbids us to think of this world except as the ante-chamber of the next, can think of death as the warrant for our release; there is a window high up in our cell which gives us tantalizing glimpses of a wider world beyond, and we long to taste its more generous air. We must look, then, to the prison life of Philip Howard as a sacrament of human life in general; we must learn from him to face the ten years, twenty years, whatever it may be of life that remains to us, in the same spirit in which he faced those ten years which saw him a prisoner in the Tower of London ...
Let us ask Philip Howard, a prisoner no longer, but a courtier of the Queen of Peace, to remember the days of his low estate, and pray for all that multitude of human beings who lie, justly or unjustly, necessarily or needlessly, in prison. May the slow years that pass over them, and pass them by, bring them nearer to God, instead of making them disappointed in themselves, embittered against their fellow men. May he win freedom for the souls that are crushed by captivity; and for us, who go free, may he do more; may he bring every thought of ours into the captivity of our Master, Jesus Christ.
- Ronald A. Knox
Posted by Athos at 11:23 AM