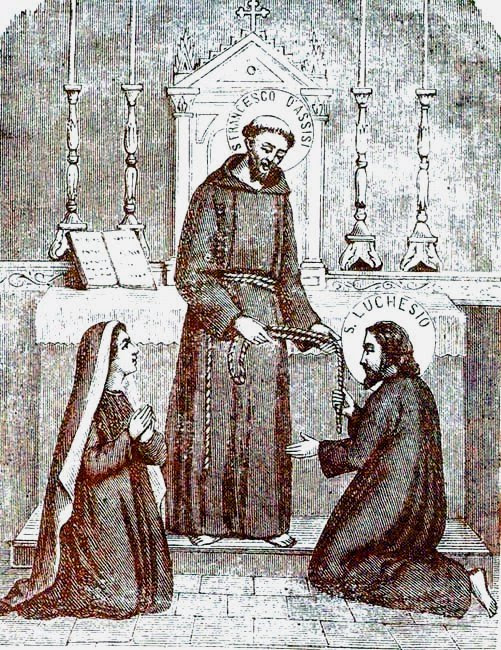 Today, April 28 is a great Franciscan feast day celebrating Blessed Luchesio and Buonadonna first members of the Third Order of Franciscans, now referred to as the Secular Franciscan Order.

Luchesio Modestini (birth date unknown) was a merchant in the town of Poggibonzi in Tuscany.  At some point Lucesio had a moment of conversion and realized how foolish it is to strive only for worldly goods.  About this time Saint Francis of Assisi came to Tuscany. After his sermon on penance, many people desired to leave all and enter the convent. But Saint Francis admonished them calmly to persevere in their vocation, for he had in mind soon to give them a special Rule according to which they could serve God perfectly even in the world, without entering into Religious life.

At Poggibonzi Francis visited Luchesio, with whom he had become acquainted through former business transactions. Francis greatly rejoiced to find this avaricious man so altered, and Luchesio, who had already heard about the blessed activities of Francis, asked for special instructions for himself and his wife, so that they might lead a life in the world that would be pleasing to God.

Saint Francis then explained to them his plans for the establishment of an Order for lay people; and Luchesio and Buonadonna asked to be received into it at once. Thus, according to tradition, they became the first members of the Order of Penance, which later came to be called the Third Order, and then the Secular Franciscan Order.

I personally would add and go along with the following from Every Day Catholic this inspirational byte (scroll down on link a little past half way to SAINTS AND HEROES AMONG US) on what it means to be a member of the SFO:


As Secular Franciscans together, the Flickingers have drawn "closer to each other and to God," says Lois. "There is no stronger bond as a couple than seeking together to deepen your spirituality," she told Every Day Catholic.

Posted by David Nybakke at 9:29 AM