Every Soul a Fiefdom 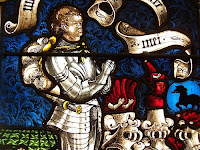 Any film depiction, any fictional narrative, any conjectures about the days and years of medieval Europe that do not include regular and normal reference to the Catholic faith of the people - from yeoman to monarch - is baseless balderdash and rearward projection of our threadbare, faithless, secularist era.

To believe that men were as functionally atheist and pragmatically unthinking of the will of God then as they are today, I say again, is not only poppycock but slanderous.

Did they use phrases fervently or as mere catch-phrases, going along to get along? Well, with how much fervor do you always - always - pray the Our Father ('Lord's Prayer')? Exactly.

But medieval Europe was drenched with the language of the Church, the language of the Faith; which were one and the same thing. As you have noticed, this is not the case today; yes, sure, in pockets, but not in the mainstream media, not in politics, not in general. It is the exception to the rule. The reformation, so-called, arrogated the arbitration of revealed knowledge from the true keeper of the deposit of faith. Now, every one from the storefront preacher to NPR tries to define the terms of discourse for faith and morals.

In our sad times, most persons are bereft of the wholesomeness of the Catholic faith (I'm sorry, but all other christianities are downstream) their birthright, scorned and rejected out of ignorance, assumption, prejudice, or political expediency. Therefore, those who still are graced enough to join in full communion with Mother Church see the truth of everyones' personal responsibility:

The greater number of men have by far too high an opinion of their own worth and too great a confidence in their own strength, but of their own vocation, of the end to which they are destined, they have, in general, a sense far too low. They do not believe in it; they look upon their calling and destiny and themselves as from the point whence they survey the whole world. But in this they are guilty of a great error and of a great injustice; for every man is a separate world in himself, a true micro-cosmus in the eyes of God and in the plan of the whole creation. Every man has a separate calling and an end peculiar to himself.

As in the warfare of the Middle Ages, when each man was regarded as a power, so in the spiritual combats of all times, Chivalry requires every man to believe that he is personally called upon to pronounce between error and truth, injustice an justice, vice and virtue.

May you know, gentle reader, that your heart, your soul, your conscience - all is a fiefdom and unity that will be judged by the Triune God - Father, Son, and Holy Spirit. There is no hiding behind the spirit of our age. Each one of us will be judged. How well are you fighting the good fight in your realm?
Posted by Athos at 4:39 PM