The Seven Sorrows of the Virgin - Albrecht Dürer 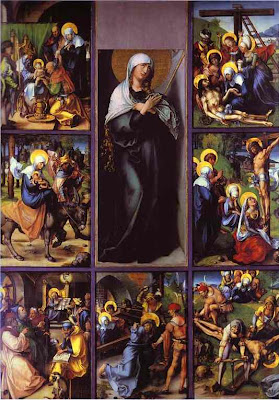 Saturday, September 15 -- Our Lady of Sorrows
The central figure in the German Renaissance was Albrecht Dürer, a painter and graphic artist, one of the most outstanding personalities in the history of art.
Albrecht Dürer was born on 21 May, 1471 in Nuremberg, south Germany, son of a prosperous goldsmith Albrecht Dürer the Elder (1427-1502), and Barbara Holper. His early training was in drawing, woodcutting and printing, which were to remain his main and favorite media throughout his artistic career. 1486 through 1489 he was apprenticed in the workshop of Nuremberg artist Michael Wolgemut.
He traveled much. In 1490 he left his native city for four year, probably initially visiting Cologne and possibly the Netherlands. He traveled to Italy twice in 1494-95 and 1505-07, visited Venice and Bologna, perhaps Florence and Rome. His fame was broadcasted through his engravings, and artists in Italy were soon drawing on them for ideas... The Seven Sorrows of the Virgin is the earliest known altarpiece by Dürer. It was originally very large, about 2x3 m. The right half, representing the Seven Joys of the Virgin, is now missing and only the left part with sorrows survived. The central part depicts the grieving Virgin after the Crucifixion. Around the Virgin are seven smaller panels with detailed scenes from the life of the Christ (from top left): the Circumcision, the Flight into Egypt, the 12 year old Christ among the Doctors, the bearing of the Cross, the Nailing to the Cross, the Crucifixion and the Lamentation. The altarpiece was bought in mid-sixteenth century by the artist Lucas Cranach the Younger (1515-86), it was probably him who sawed the work into separate panels.
Posted by David Nybakke at 10:13 AM