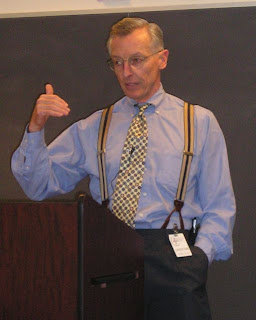 At the opening session of the Emmaus Road Initiative, author and lecturer Gil Bailie chose to open with the words of Psalm 16, "The LORD has put in my heart a love for the faithful ones who dwell in His land." Quoting prolific author and Catholic theologian Hans Urs von Balthasar's Heart of the World, Mr. Bailie asked, "What language would (the Lord) have to speak so that the lost in their land would be able to comprehend what He came to reveal? He chose the language of the flesh -- an anthropological language as the vocabulary with which to retrieve our humanity..."

Mr. Bailie wove a deep personalism -- our "mutual ensemble of sadness" -- with his usual prophetic hermeneutic of the challenges and perils facing an ever-growing de-Christianized west. Mentioning the similarity between the two disciples on the road to Emmaus and present-day followers of Christ, he noted how tempting it is to stay in a slough of reminiscing. "They were reminiscing 'all that had happened' -- and this is on the Day of the Resurrection! But once the 'nickel drops,' (at the breaking of the Bread), Pentecost, say, and after, there is no reminiscing. It is all forward."

One can see that Mr. Bailie wants Christians to face the perils of a demoralizing post-modern nihilism within the Christianized west, and Islamic fascism without (at least spiritually), with a faith in the power of the living Christ to use what has been given us: the Answer -- Scripture, Tradition, the Creeds, the Magisterium. Use these, by going deeper into them and their meaning for the historical Now, in order to be the right persons at the right places to love and serve the Lord, and one another.

The upcoming nation-wide Emmaus Road Initiative meeting times and places are to be found here.
Posted by Athos at 2:46 PM

Thanks for your speedy summary complete with photo.

Among the ideas I look forward to exploring more -- the rhetorical/pedagogical problem of Jesus' self-revelation to his disciples and others. Gil suggests, as you say, that the language Jesus employs is of the flesh.

This is a great explanation of how revelation departs from strict rationality and draws upon mimetic power. Do you have any other thoughts or examples of this topic presently?

It was a pleasure to see and have a moment or two to talk with you at the session, Scott.

What you are talking about in your question is a consuming question and concern particularly for Aramis, our specialist in the area of the crisis of personhood, the subject, and mimesis. All of his posts home in on it.

I truly think that Bailie's own Violence Unveiled may be the best at describing mimetic theory with a taking style and a plethora of examples. It is far less sectarian than he seems to be presently, and far more explicitly Girardian in terms of the power and inescapability of mimesis -- positive and negative -- in all of our lives. Cheers

One more stab at it, Scott: Perhaps Bailie would agree (or perhaps not) that Jesus chose as his modus operandi both thematically stringing the right words in the right order, given that our human minds are a part of the divine imago dei, and being the "right Person at the right time," because divine, steadfast, covenantal love ( hesed, agape) for humans is both for the mind/heart and embodiment.

You might want to see Oughourlian's Puppets of Desire too.

An example: The sense of righteousness in crowd contagion (read: "the streets") is enormous, and has nothing to do with ostensible claims of obeying an imam or the deity.