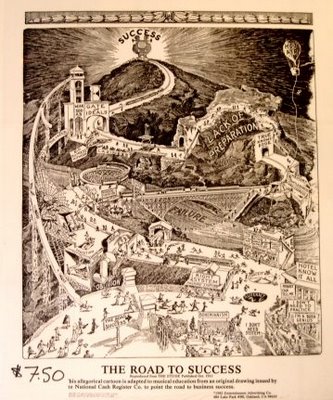 Don't Get Sucked In is the Western Culture's mantra which has been highly influenced by the Gospels, and though it is sound advice be aware that attempting to stand separate from the Gospels in a self-possessed posture, with even a virtuous character, is only the first stage of being possessed by something else.

We have grown up under the cloud of the Enlightenment Age and have been taught that one can take or leave religion (or simply compartmentalize your life so it has little or no meaning). My son, who worked at a printing and copy shop years ago, brought home the poster I have attached here because he thought I would like it. I have used this over and over in seminars on the problem of living without God as the center and focus of one's life. I would often conclude that the trajectory of one's life seems to always be misfiring and/or aborting when God is not at the heart of your life. So it seemed to me that the poster fits the lesson of this tape.

“One fine summer night in June 1933 I was sitting on a lawn after dinner with three colleagues, two women and one man – we liked each other well enough but we were certainly not intimate friends, nor had any one of us a sexual interest in another. Incidentally, we had not drunk any alcohol. We were talking casually about everyday matters when, quite suddenly and unexpectedly, something happened. I felt myself invaded by a power which, though I consented to it, was irresistible and certainly not mine.” (inserting comment: This experience is obviously NOT self-possession.) “For the first time in my life, I knew exactly – because, thanks to the power, I was doing it – what it means to love one's neighbor as one's self. I was also certain, though the conversation continued to be perfectly ordinary, that my three colleagues were having the same experience. (In the case of one of them, I was later able to confirm this.) My personal feelings toward them were unchanged-they were still colleagues, not intimate friends, but I felt their existence as themselves to be of infinite value and I rejoiced in it.

“I recalled with shame the many occasions on which I had been spiteful, snobbish, selfish, but the immediate joy was greater than the shame, for I knew that, so long as I was possessed by this spirit, it would be literally impossible for me to injure another human being. I also knew that the power would, of course, be withdrawn sooner or later and that, when it did, my greed and self-regard would return. The experience lasted at its full intensity for about two hours when we said good night to each other and went to bed. When I awoke the next morning it was still present, though weaker, and it did not vanish completely for two days or so. The memory of the experience has not prevented me from making use of others, grossly and often, but it has made it much more difficult for me to deceive myself about what I am up to. And among the various factors which several years later brought me back to the Christian faith in which I had been brought up, the memory of this experience and asking myself what it could mean was one of the most crucial, though, at the time it occurred, I thought I had done with Christianity for good…”

Auden continues: “Not the least puzzling thing about it is that most of the experiences which are closest to it are clear cases of diabolic possession as when thousands cheer hysterically for the man-god or cry blood thirstily for the crucifixion for the God-man. Still without it, there might be no church.”

Auden describes very well the positive aspects of being indwelled by a spirit that brings one to a level of being beyond one's usual ordinary way of relating to and with others. I wish he could have put his finger on the "who" in the mimetic equation: from whom did he "catch" this spirit, sitting there among that circle of friends?

Was it pride that kept him from noticing who it was who was modeling this "higher" (I know spatial imagery is inadequate) level of existence? Did the notion of imitation not even enter his understanding? If not imitation, whence this spirit?

His insight into the satanic power of the crowd - and its necessity in the creation of the Church - is phenomenal.

2) In the Magnificat for Tuesday 23rd, Mass the authors comment; “Christ tells us plainly: Whoever does the will of God is his brother and sister and mother. For to claim to belong to Christ without embracing Christ’s YES to the will of the Father is to make an idol of him. By the will of God we have been consecrated through the offering of the Body of Jesus Christ. To claim kinship with that Body means embodying Christ’s obedient self-offering.”
It seems to me this is describing pseudo-Christians who, though not living out the ‘YES’ to the call of God’s Will for them, claim status as a Christian. From pro-abortion politicians who claim to be Catholic/Christians to the advocates of gay marriages, there seems no end to what one could draw out from this diagnosis of pseudo-Christian practice. This seems to beg a couple questions. Who can live up to living this out in their lives? Can we and is it appropriate to observe in others (and much more difficult in ourselves) this missing the mark of being Christian? I feel that Gil has been 'on a mission' himself of late, calling out pseudo-Christians from their liberalness (for a lack of a better descriptive term). Is it appropriate to and/or how do we help expose the real 'YES' to the call of the will of the Father from the false and idolizing call back to the sacrificial sacred?

I told Bailie once that I heard the voice of Rome in his taped talks, and hearing this call, I (naturally) followed it into full communion with the Catholic Church. The vast patrimony of the Church is for each of us to venture into, explore, and deepen our relation to Christ and his Church.

Thank you, Aramis, for helping in this endeavor of faith, hope and charity.

And today is the feast celebrating the Conversion of St. Paul! Apt discussion.

Father Richard Veras had a great explanation of the meaning of Paul's conversion in the Magnificat today. (If you do not subscribe rush out and get a copy today.) This writing fits well with what I was trying to say a post or 2 back; that conversion is about us all and not just an individual occurrence. Veras stresses that the significance of Paul's conversion is not that someone had a great “spiritual” thing happen to them, but that someone came to see that the presence of Christ is in his Church – to come to know Christ and to be with Christ is to be with other followers who are members of the Mystical Body of Christ.

Veras ends the meditation with the following: "Clearly 'mystical' does not mean spiritual. Paul knows Jesus Christ as a person who lives here and now among the living flesh of his followers... When we spiritualize the presence of Christ, we relegate ourselves to a prison in which Christ is imaginary, abstract, and unable to touch and transform me as he did to the sinners he encountered two thousand years ago. Let us pray for the experience of Saint Paul, let us seek Christ out in the members of his Church he places in our path today. Let us verify that through these disciples today, he continues to encounter us in the flesh. The Risen Christ in the flesh is what freed Saint Paul. Jesus Christ, truly present in his Mystical Body, is the only one who can free me."

Yesterday's Gospel lesson had Jesus visiting his hometown synagogue. His listeners shook their heads at his wisdom and authority. Yet they also said, "Isn't this Mary's boy?"

Jesus marveled at their lack of faith and he could do few signs because of it.

Why do more people NOT experience Jesus "encounter(ing) us in the flesh?" Why is European Christianity shriveling and dying?