The Cross, Remorse and Conversion 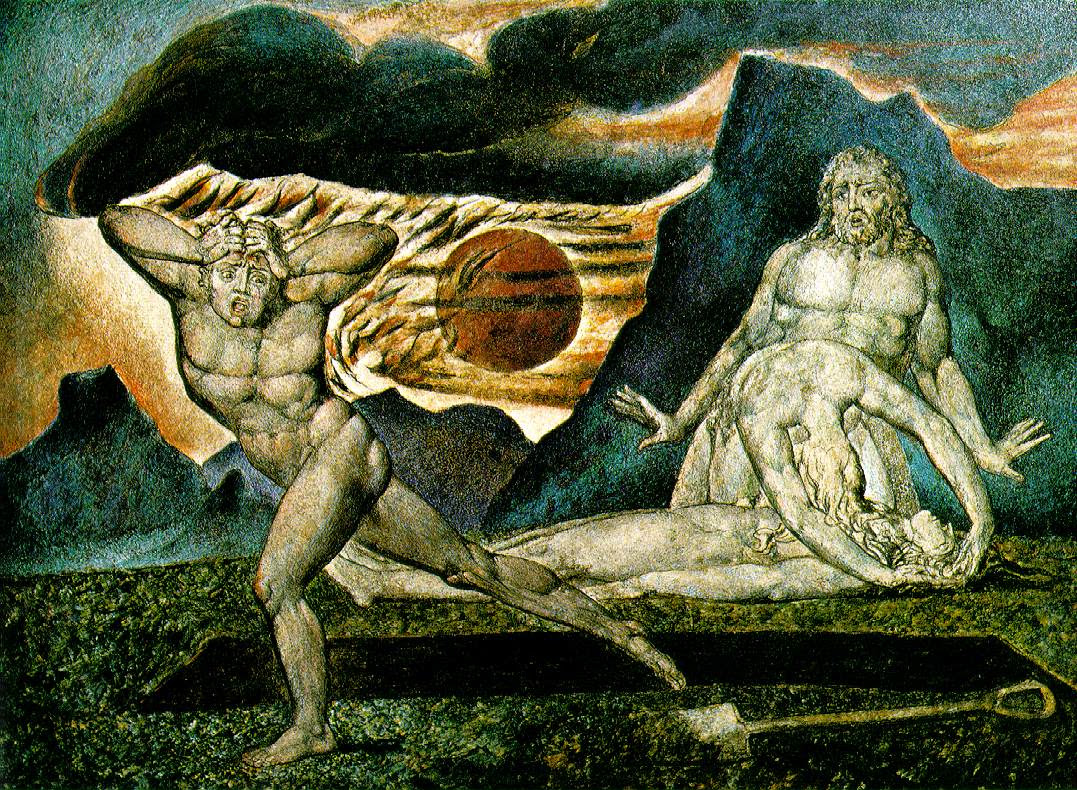 In our ongoing discussion of Gil Bailie's tape series on conversion, William Blake's painting depicting Cain's remorse at his murder of his brother, Abel, is operative. In the excerpt below, Bailie speaks of the absolute necessity for remorse in pulling away from the crowd (of which modernist "individuality" is a shammy parody) in order to experience authentic Christian conversion. As brother Aramis points out, however, this removal of oneself from the crowd is not meant to be an isolatory event. Rather, it is so one can (a) realign oneself with the true source of ontological substance, and (b) enter into true communion with others so graced in the Catholic Church, the gathering of those called into being around the eucharistic Lord at his eucharistic table. Bailie:

Christian conversion always means coming out of the crowd. When Peter heard the cock crow, it was curing him of that little crowd he gathered with around the charcoal fire at Jesus’ trial. When Paul is knocked down on the road to Damascus and he hears the word ‘persecution’, he is being pulled out of the crowd, of the mob.

So the birth of subjectivity, real subjectivity, is conversion. And the cross reveals because it destroys all the illusions, eventually, that allow us to believe in the god of the sacrificers. And once those illusions are taken from us, it is possible then to see the living God, the God of truth, which in human culture is always the God of the victim. Not because God or Christianity is perverse or masochistic, but because in a world that generates its culture and coherence sacrificially, the living God can only manifest via the victim. So the cross takes us out of the crowd and reveals to us something that takes the crowd’s place. You can’t come out of the crowd and just stay out of the crowd with no other grounding. You will just drift right back into another version of it, probably a sillier, shammier version of it …

Labels: Conversion, Gil Bailie, Let This Mind Be in You

I have been listening to this tape set over and over again finding level after deeper level of thought and insight. All of it helps to clear the crowd-as-primary-filter-source from my mind and heart. Only after, what seems extreme, discipline and obedience to Christ and the Body of Christ (Church), have I been able to receive and acknowledge brief moments of clarity, truth, goodness and beauty.

Comments like the one I have copied here are so important not to gloss over. In tape 3 of this series Gil introduces Simone Weil's gravity and grace quote, as well as comments from Nietzsche where they both make clear that volition or individual will is nothing more than getting caught up in a social contagion. Nietzsche is given credit for seeing that there are only 2 organizing forces for the order of a community, either Dionysus or Christ. Simone Weil uses the imagry of gravity or grace.

Here is my struggle with all this: this is so radical a thought that virtually no one is open to hearing it - the idea that life comes down to an either/or choice is so foreign. What has been your experience in how receptive others are when sharing this either/or scenario?

What passes for freedom in modernity is the promiscuity and paralysis of a mind unable to choose. To close out all other options is tantamount to a prison cell by the standards of a modern individual. To marry intending to live commitedly for an entire lifetime, bear and raise children are all constant reminders of one's mortality -- something a perpetual adolescent must not look upon.

Choosing to follow the faith of fishermen -- CHOOSING -- on the other hand, is true freedom. And it is also true originality, by the way.

But this is, as you say, Aramis, "so foreign" to any (us included!) who are raised in modernity. Fortunately and by grace, some of us see hints and inklings of the truth of Catholic teaching. We shouldn't be smug about it, that is for certain. But it can feel strange and out of place among the "cools" and the "brights" of the spirit of our age.

This is why Dorothy Day called her autobiography The Long Loneliness no doubt.

We suffer not only from paralysis of a mind, but also a total dismissal of any form of obedience to a choice made. Hey, no big deal, you can always change your mind...